I love travelling because I love new experiences, and I’m always searching for a new novelty. There’s no greater feeling than discovery, be it a new band to explore, a new person to get to know, or a new hobby to get to grips with. This weekend, on a cloudless Sunday morning, I hopped in a car with three friends and we headed to Cayton Bay, just south of Scarborough, for an afternoon of surfing in the mild spring sun.

I tried surfing a couple of years ago in Byron Bay, Australia, however, with it being June at the time, Australia was in the middle of winter, and conditions weren’t ideal – an overcast sky, choppy seas, and myself horribly out of shape after three years of partying as a student. After heading out on the surf lesson expecting scenes from Surf’s Up, I swallowed half the ocean, got absolutely battered by the waves, and was an exhausted, quivering blob within half an hour. Fun times.

Byron. Great surfing, unless you’re shit at it. Like me.

With memories of my briny pummelling Down Under resurfacing after years of repression, I wasn’t expecting much more than a few fresh bruises from Cayton Bay. We parked up high on the cliff, hired our boards, and crammed ourselves into delightfully sodden wetsuits, which were extraordinarily tight in all the wrong places. We wondered down to the sea on a small path that winds down the looming cliffs, boards in hand, walking as bow legged as John Wayne after a good buggering.

After approximately 3 seconds of stretching, we waded into the North Sea. The tiring thing about surfing isn’t the bit that you see in films – cascading down gargantuan waves, that’s the fun bit. The knackering element of surfing that no one warns you about is reaching the damned waves. Every 5 seconds or so another unapologetic wave comes and knocks you for six, dragging you back several feet, making it difficult to lug the board out into deep enough water. The sea feels alive, and at times can feel like it has a personal vendetta. It’s hard not to project a personality onto a heaving mass that slaps you in the face constantly over the course of two hours.

The key, though, (and this is something I never figured out in Australia) is to slow it all down. With the sun on my back and friends around me, there seemed no need to rush. The sea certainly wasn’t going anywhere. Rather than struggle against the current like a wasp trapped in a cider on a hot day, we gradually waded out, bobbing gently over the waves (although still occasionally taking one to the face).

Once you’re at a suitable depth, it’s time to pick a wave. When you see one you fancy, you watch it form in the distance and roll towards you, and try to determine whether it will have any power by the time it reaches you (or if it will have too much power – hey, I’m just a beginner). You turn your board around, flop on top of it, and paddle slowly towards the shore, in giddy anticipation. It can feel like an age goes by as you wait for the wave to catch up to you. Suddenly, the board takes on a life of its own, and the wave is under you, carrying you with it with shocking force. The speed feels amazing.

At this point, it’s time to stand up. This is where you either manage to heroically leap to your feet and feel king of the world, or go flying arse over tit and disappear into the toiling surf. Drawing your right leg (depending, obviously, on which is your leading foot) up as high as possible, you push yourself upright on your hands and pop up, left foot forward. Assuming you’re not three feet underwater with a bleeding nose at this point, now is the time to enjoy the moment, and make the obligatory ‘gnarly’ sign with your hands.

Sometimes it goes fantastically well, sometimes you eat shit, that’s the nature of it. It’s common to slip mid jump-up, and emerge from the water three seconds and twenty feet later, having been wrestled down the beach by the tide. The best bail of the afternoon was kindly donated by my friend Alex, who stood too far back on his board, shooting it skyward. With Alex falling backwards into the sea, the board shot vertically upwards, giving him half a second to wonder where it had gone before it clonked him neatly on the head, sending him tumbling back underwater. He re-emerged from the sea, red faced, dizzy and fuming, like a mermaid on a hen night. 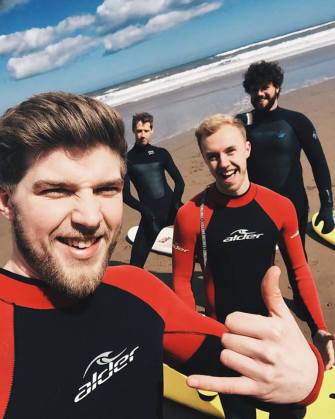 We all managed to stand up plenty of times, which was a pleasant surprise for us all. I caught some really great waves, and managed to ride a couple to the end. It’s a fantastic feeling of achievement, and the reward is worth the effort. After two and a half hours of playing tug of war, we let the sea finally have its way and wash us ashore, floating in on our boards until we were beached on the damp sands. I let the sea lap against my carcass for a while before I could summon the strength to heave myself up, and we headed off to swap the sea breeze and crashing waves for a beer and a cold pasty.

Sometimes I get so focused on travelling abroad, planning trips, reading about other cultures, that it’s easy to miss what’s right on my doorstep. There are so many new things to experience, if you’re just willing to try. My body aches pretty much everywhere today, but it’s a good ache. The kind of rewarding stiffness that is your body saying ‘you should do this more often, you unfit bastard’. I’ll be going again, without a doubt.

Bring it on, Sea.

2 thoughts on “Surfing at Cayton Bay”