On my sixth day in Cuba I bid farewell to my German travel companions and it turns out that was  terrible idea resulting in one of the most profoundly humiliating evenings of my life. When you’ve read today’s diary entry, consider this: it actually gets worse. Enjoy!

Got up at 9 for breakfast, which was monstrous in size and divine in flavour. The hosts at our Santa Clara casa were such lovely people it’s hard to do them justice – nothing we asked was too much. Even Martin’s garbled request for a ‘nail’ to pop his blister.

Said a not so emotional goodbye to the Germans, hopefully will see them in Havana. Got a Tuk Tuk thing to the coach station and had to battle my way through a legion of jineteros waving business cards in my face and coaxing me to their private taxis.

Got the coach to Trinidad. Coach was stinky and pretty grim on the whole but hey ho.

Trinidad is beautiful. A gorgeous colonial town of brightly painted casas and red brick roofs nestled among jungle covered mountains. Got a lift from the station on another Tuk Tuk bicycle contraption . Bumpy cobbled streets and a rickety bike have ruined my arse cheeks. Checked in at my casa, spent an hour killing the extended family of flies that were squatting in my room, and headed out.

Explored the town, tried to find the town square, accidentally walked through it without realising and carried on until I was wondering through a distant mountainside slum. 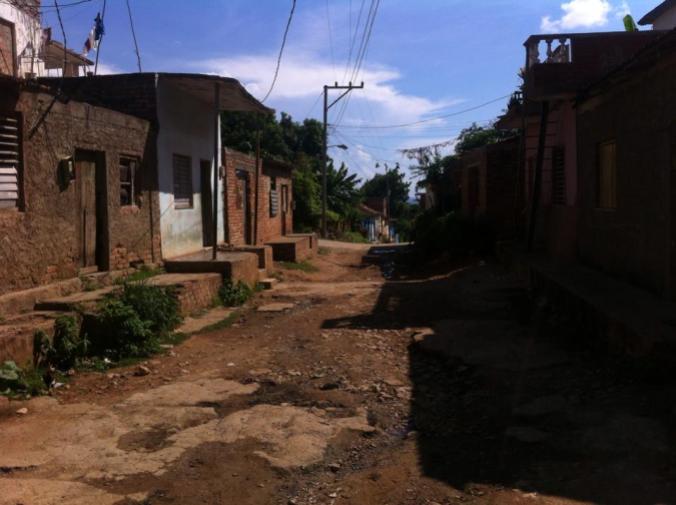 Realised my error and headed back. Grabbed a sandwich in a grossly overpriced restaurant (although they did write ‘enjoy it’ in ketchup and mayonnaise on my plate, which is impressive but also to me sounds vaguely threatening)

Back in the town square I found the bell tower Martin told me about. Paid 1cuc to go up – absolutely staggering view of the World Heritage town and encircling mountains. Went a bit wild taking photos. It’s impossible to take a photograph without capturing beauty in this town. 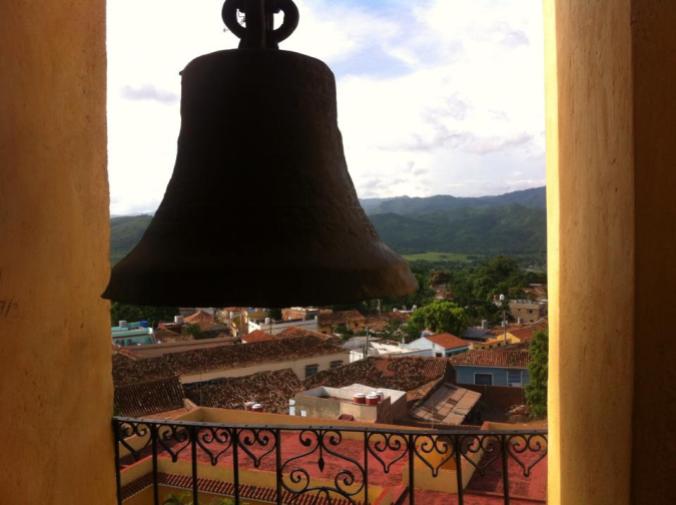 Back at the room now. Getting back into the swing of this travelling thing. First couple of days were hard but I feel happy and confident in myself again. Don’t want it to end. Hoping to meet some friends tonight and head to some rave cave I’ve heard a lot about. Saw a smiley girl earlier a couple of times – hopefully she speaks English and I will have a friend.

Went to the casa de music on the famous steps just off plaza mayor, where everyone congregates on an evening. Had two beers watching the scene – which was astonishingly beautiful.

A pink cloud flecked sunset loomed over the town square as the light waned and local Trinidadians wondered to their nightly meeting place. Homeless dogs chased every passing vehicle. A bare chested local rode through on a horse. 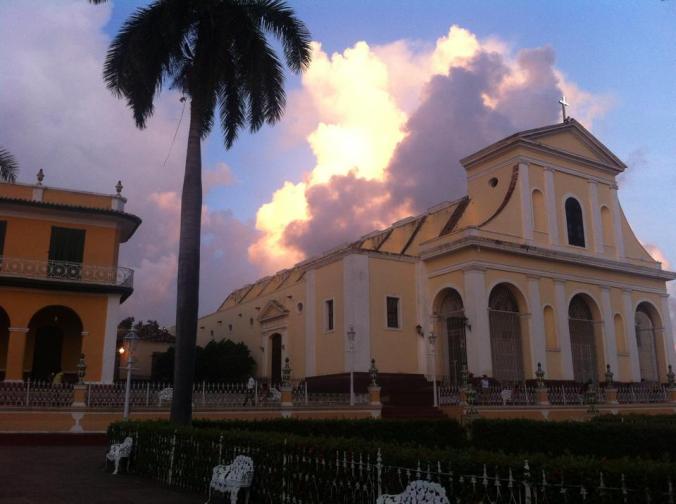 Tourists and locals alike plonked themselves on the staircase. There was no one alone, like I was. An awful lot of couples, which really infuriated me. Was really hoping to meet someone travelling solo – it’s so much harder to just crash someone else’s party.

My plan was to drink on the steps until I heard an English accent, then introduce myself and hang out before heading to the caves. What happened was a level of humiliation and rejection not experienced since high school P.E.

After a couple of beers at 2cucs each, I had the ingenious revelation that a bottle of rum is also 2cucs, and therefore a far more sensible investment. Bought a bottle of rum, mixed it with cola and drank the majority very very quickly. Got me absolutely hammered – memory of about two hours is a complete blur. Staggered around trying to sober up, falling asleep everywhere.

Made a complete twat of myself. Everyone with an ounce of common sense was drinking slowly and enjoying the extravagant salsa show taking place on the steps as I floundered about in the background. Would have been beautiful had I not been arseholed, alone, sickly and depressed.

Half sobered up after 2 hours, enough think again. Saw the smiley girl with a friend. Didn’t dare go over and say hello. She probably saw my eyes rolling and head lolling. She was taken to dance by a local and any chance of a friend was gone. Haven’t had an actual conversation in two days now.

Last night was painful. It felt like being the only kid not with a date for prom. As everyone made friends and danced the night away, I stumbled around on the cobbles trying to focus on keeping my eyes open and staying standing at the same time. At one point I awoke from an involuntary nap to find myself slumped on the cobbles surrounded by stray dogs. Try and style that one out.

Ah. Well. Tonight will be better.

Day 6: Mountains and Cave Discos and Me, The Town Drunk

“Interesting that in this culture the better you dance, the cooler you are. Back home I once saw a trilby clad man attempt the moonwalk in Oceana and get bottled.”