Today is the day I’ve been waiting and hoping for.

Woke up still steaming for breakfast before a horse riding tour organised by my casa. Breakfast is becoming less of a joyous banquet and more of a forced feeding. Crammed myself full of bread, fruit, cheese and coffee before a car arrived at ten. Mojito hangovers are fierce and I struggled to even keep my eyes open as we drove to the horse trail.

Hopped on a horse that didn’t want to walk. Guide kept shouting something at it in Spanish and it eventually started to drag it’s heels (hooves?) in a slow plod that felt almost sarcastic.

Tour guide spoke no English and my Spanish is wank, so the two hour tour was pretty silent, apart from my guide occasionally pointing out various fruit plants. 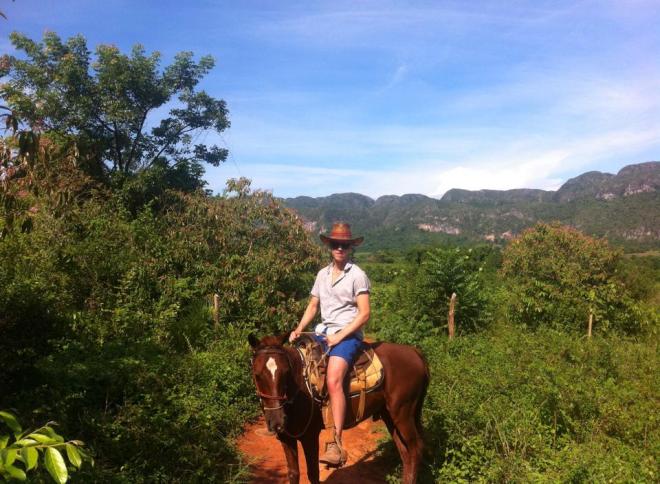 Nothing to see here. Just me looking like an absolute alpha male. Move along.

Saw a cock fighting arena, where two men stood thrashing each other with their genitals. Just kidding. Cockerels were wondering about, but thankfully no fighting was taking place. Gross ‘sport’.

Eventually got saddle sore and wished I’d just gone for the one hour tour. The horse riding itself doesn’t compare to my experience in New Zealand – that felt like I was really controlling the horse and working with it, rather than being ferried along like a sack of spuds on a conveyor belt. Turns out that what I have heard shouted at horses all across Cuba is the word ‘Caballo’. They shout this to get the horses moving. Presumed it means go, or faster. Turns out it means ‘horse’. Ingenius.

Was getting dizzy from the heat, so thankfully we stopped and wondered up to a tobacco farm. Had a delicious mango juice, and met a handful of other horse-trekkers. There was an older Belgian couple, Kurt and Sharon (their names sound much more exotic when they pronounce them) and a young German couple. Watched another cigar being rolled, and passed it around. Had honey on the end, and you could actually inhale without choking.

This chap rolled us a magnificent cigar inside the tobacco drying house. Allowed us to smoke it… inside the building made out of dry leaves. Cubans just don’t give a fuck.

The others bought cigars (at jinetero prices, but I didn’t say anything) and we got chatting. They all spoke English – I hate only speaking one language. It feels so ignorant. The Belgian guy spoke French, German, English, Dutch and some Danish. They said they were going to a beach later and invited us all along.

They dropped me back at my casa in their rental car and I chilled for an hour, then met them at the town plaza at 2.30 after grabbing a quick peso pizza from a stall out of someone’s living room window. The peso pizzas here are essentially dough with some cheese on, but it fills a hole, and for about 70 pence I can hardy complain.

The Belgian and German couples arrived, I hopped in the car and we sped off to find some distant beach. Took about an hour, through mountains and pine forests on treacherous old roads. The beach was gorgeous – calm waters and white sands. Unfortunately, snorkelling was crap, as the locals think nothing of lobbing beer cans and other litter into the sea. Littering is a pet hate of mine, and many a time during this fortnight I’ve winced watching the locals finish a can and lob it carelessly over their shoulder without a second thought.

The Belgian couple are police officers, Sharon is an inspector and Kurt is chief inspector working on the French Belgian border. You can tell they love their work – Kurt enthusiastically told me stories about his days in the royal guard, the riot police, and mounted division. Really interesting stuff.

Headed back to Vinales before it got dark and only got lost once or twice. Saw the sun set behind the mountains, turning the whole sky pink.

Texted Sina and met him and Marie Claire in the same salsa bar as last night. Martin came down too, and Kurt and Sharon joined us. Sina’s Cuban tour guide from his horse trek joined us also, along with his girlfriend. A real motley crew, with three or four languages criss crossing the table constantly and me nodding sagely, smiling knowingly, and pretending I had a clue what anybody was on about.

Stomach started churning after a couple of beers. Entry was a cuc, and so I was loathe to run home to shit and pay in again. Instead braved the bar toilets, grabbing a fistful of toilet roll off the female attendant slumped outside.

Toilet door kept swinging open, didn’t lock, toilet had no seat and no top, so you could see straight into the plumbing. Shat myself down a belt size, and then realised the flush didn’t work and she had given me one square of toilet roll. Somehow, thank christ, I was able to make do, and after many attempts was able to flush away the shame. Fuckin Cuba. 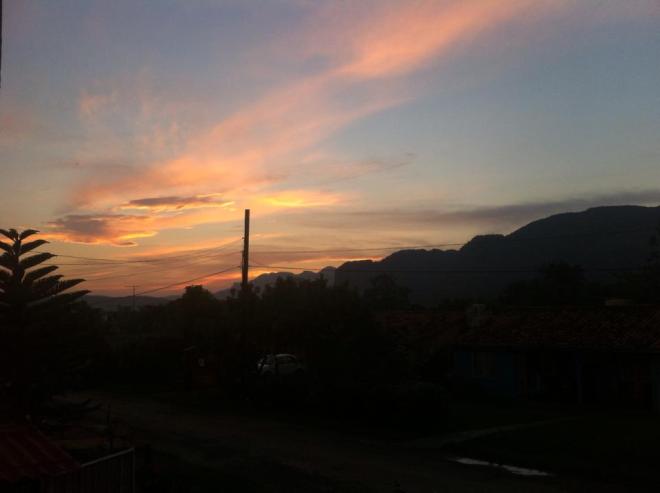 A nice sunset, to help cleanse your mental palette after that unfortunate last paragraph.

Had more mojitos and chatted to Marie Claire in between her enthusiastic if rhythm lacking salsa excursions. Left around 1am and got everyone’s names for Facebook, all agreeing we could stay with each other if we came to each other’s countries. Sina and Marie Claire live in Amsterdam, so if I ever get around to travelling there that would be great.