We all woke up nursing a dreadful collective hangover. Got a taxi to the Capitolio building with Martin and Sanya. Got a disgusting ‘meat’ sandwich thing which I ate two bites of before binning. Threw some to a stray dog, which hungrily ate it and hobbled away retching.

Went to a park to get wifi (the parks, for some reason, have wifi) and swapped a hundred or so quid over into my bank. Got cash out and met up with Joe before heading to the beach. The beggars where we got the bus from are the worst I’ve experienced. They refuse to leave even after being told no ten times. One old woman was pleading with us, showing us dirt on her skin. Everything I have read has said tipping beggars harms the economy. Doctors earn 20cuc a month – a beggar can earn twice that easily.

Everyone and their mum’s piles down to wifi hotspots. Who are they all texting? Nobody has any bloody internet!

Sanya, Martin, Joe and I got to the beach on a lame tour bus with tourists frantically snapping photos of every building, bush and bird we passed. Got some beers and were metres from the beach when it started to rain. Waited it out in a restaurant, where we cracked our own tins as a frowning waiter looked on.

Beach was gorgeous and quiet, and the sea was warm. Would have been idyllic had furious black clouds not been rapidly approaching from the horizon. Had a swim and a long conversation with Joe about pretty much everything. Started to piss it down again so hopped on the bus back.

At the hostel, we met everyone else, including an Australian guy called John, born in Hong Kong. He’s a doctor of astronomy studying galaxy formation, 28 years old, and is 8 months into a 2 year world trip. He’s done almost every country in South America so far, and is planning on going basically everywhere. He saved ten years for this trip.

Lesley, the German girl I met on my second night (whose name I absolutely cannot remember every time I speak to her), visited the hostel to meet Joe. We all got food from a local paladar – a licensed restaurant. Chicken, rice, avacado and potatoes. Took about an hour waiting for it. Some of the best advice I’ve had was from Kurt in Vinales – you need a lot of patience in Cuba. Nothing happens quickly. It was worth the wait. Delicious. One of the tastiest meals I’ve had in Cuba (although that’s not difficult).

We bought rum after and I headed to the malecon with Lesley, Sammy and Sanya. Drank rum on the wall. Talked to Lesley about her time in Cuba and it’s effect on her relationship with her boyfriend in Germany – she’s here for 7 months. Told me she has previously had open relationships and considers it completely normal and healthy. Sanya, Sammy and I couldn’t comprehend the idea of our partners sleeping with someone else and being fine with it. I’d be horrified. In theory though, I understand her views. Really interesting conversation in a gorgeous location.

Headed back at 9 to meet Joe and John. Had mojitos at the hostel, then, armed with more rum, we set out to the university amid rumours of a concert taking place there.

The street was packed full of people heading to the university steps, where a huge stage had been erected with a full light show that could be seen all over Havana. Police had made a perimeter a hundred or so metres around the centre and were frisking people as they went in – almost exclusively black people. We passed through without even an eyebrow raised.

Apologies for the blurry photography. I was hammered.

We smoked and drank rum and danced, enjoying watching the locals hanging out of windows, cramming onto balconies and clustering on rooftops to see the show. The booze turned on Sammy and he went from Cliff Richard to Keith Richards in about 10 minutes. We had to hold him back to prevent him running onto the stage. Told him he would most definitely end up slung in a Cuban jail.

Went for more rum and met a friend of Lesley’s, a dreadlocked Cuban guy called Louis. The longer we stayed, the more locals latched onto us and soon it snowballed into half the street giving us cigarettes, telling us about their cousins in Europe, and asking for rum. Louis was really cool. He works in television editing and works with Avid and Premiere – the same programmes I used at uni. He’s currently working on a documentary about a Dominican man who has collected 5000 handprints from every country in the world.

The show finished and we stayed to chat in the street as the crowd trickled away. As we floated drunkenly back toward the casa, screeching tires gave us all a heart attack. Police cruisers flew past and skidded to a halt fifty metres ahead, and officers jumped out and started knocking some Cubans about. Two groups were busy braying each other but were soon scattered and the main culprits slapped in irons. I already assumed, but now had it confirmed, Cuban police do not fuck about.

We grabbed yet more rum and stumbled to the malecon. Had a pizza each on the way, and lost half the group. Lesley wondered off with Louis, Joe disappeared to find wifi, and John made best friends with a family in the takeaway.

Sanya and I were left babysitting the paralytic Canadian on the sea wall. Any potential conversation was soiled by his constant drunken interjections and subsequent apologies. He began repeating that he needed the bathroom. I told him to go down an alleyway, vaguely hoping he might get lost and not come back. Nice guy, just an annoying drunk.

Lounging drunkenly on the malecon with a warm night breeze – there’s no better way to spend an evening.

He ventured off into a dark alley and came back exclaiming that he needed to wash his hands. He tried to reach down to the sea from the malecon, failed due to the sea wall being 10 feet high above the water, dropped his keys to the rocks below, and, before I could even say ‘moron’ he had hopped over the wall.

Miraculously he didn’t die immediately from landing badly on the sharp, slippery rocks. More and more bemused locals were gathering to watch the floundering halfwit scrabbling about among the rock pools in the dark like a pissed up Gollum on his stag do. We shone our torches down for him, and, god knows how, he found his keys.

He yelled up and three squinting Cubans put their beers down and heaved him back up onto the right side of the wall. He repaid them by flopping his arms around them and asking the same questions fourteen times. 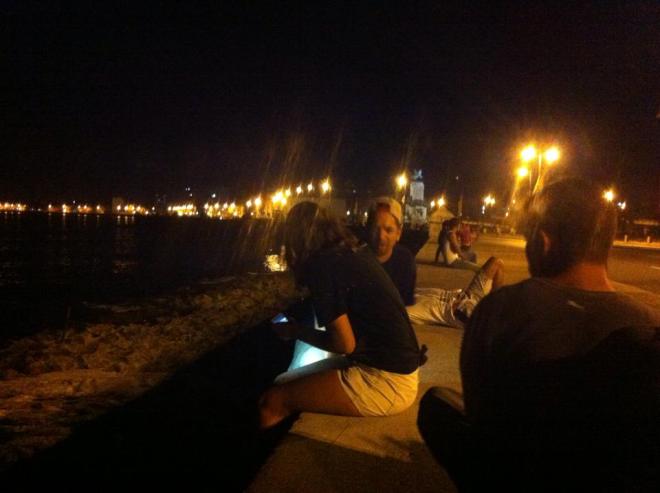 Had a monosyllabic conversation with the Cuban guys, who were refreshingly chilled and gratefully turned Sammy down when he tried to shove a fistful of coins their way. Swapped a cigarette for rum, said goodnight, and Sanya and I carried Sammy home.